HOW TO TELL IF OSTRICH SKIN IS REAL OR FAKE

Genuine Ostrich Leather is one of the most durable leathers. The natural oils that its fibers keep - even after a long tanning process - make sure that an item crafted in this beautiful material will never crack - unless exposed to apocalyptic weather conditions. Here are some expert tips from the OstriTec Team to help you navigate the world of this Luxury Leather - it's easy, once you know what to look out for!

One of the most important aspects of fake ostrich leather is to be wary of the fact that it can still be labelled as "Genuine Leather". In cases like this, the famous ostrich pattern is simply artificially embossed onto a much cheaper base leather, like bovine leather. This is one of the most troubling marketing tricks that fake ostrich goods sellers use; stating their offering to be something along the lines of: "XX Product in Ostrich - Genuine Leather". The way to get around this trick is to consider one important thing: authentic vendors of real ostrich leather goods are not going to be hiding behind word-play in order to describe their product. They will explicitly state somewhere very noticeable something to the effect of: "XX Product in Genuine Ostrich Leather", for example. The claim of authenticity is pegged not to a general term of leather, as with some vendors of imitation ostrich goods, but specifically to the genuine nature of the ostrich leather itself.

So unless a fake ostrich goods vendor is illegally misleading you by specifically claiming that their product is anything other than a bovine leather imitation, then you should always be able to look out for these suspiciously-worded product titles and descriptions as a clue as to whether what you're being sold is authentic.

Conclusion: Unless the leather product in question is categorically stated to be Genuine Ostrich Leather, avoid it.

Genuine Ostrich Leatheris a leather with a very specific texture. The "bumps" found on the ostrich skin, also referred to as "Crowns", are follicles out of which ostrich feathers used to grow. As mentioned before, fakes rely on an embossing process which literally heat-presses patterns into a base leather to give it the appearance of something else. But heat-pressing is by its nature a two-dimensional process, which can only extrude patterns either upwards or downwards into a base leather. Authentic ostrich leather, on the other hand, is distinctly three-dimensional, and each unique crown will lift or bend when pushing your finger against the leather. Try to fit your fingernail below the crown: if you manage to successfully insert your fingernail in the space where the crown connects to the hide, then your ostrich leather is a real one. If, on the other hand, you can't fit your fingernail below the crown, this means that the crown and the leather underneath are literally the same leather fiber (with one being the continuity of the other), just twisted in a different-looking way: this is the feeling of a fake, embossed leather with ostrich pattern.

Furthermore, the crowns also present a hole on their very top: this hole stands for the feather follicle that used to grown on that one crown - another incredibly small details that a fake embossed leather would not be able to provide.

Fortunately, once you know this it's easy to identify this difference visually without the need to touch the leather beforehand, which is very important when buying online. In the image below, you can really see the difference between an embossed fake and the real thing. The embossed leathers have fake crowns that do not stand up to the touch, that can't be felt as a separate, individual entity from the leather underneath - mostly because no embossing machine can come close to mimicking the rich detail and subtle natural variations that exist in the three-dimensionality of this particular type of leather. 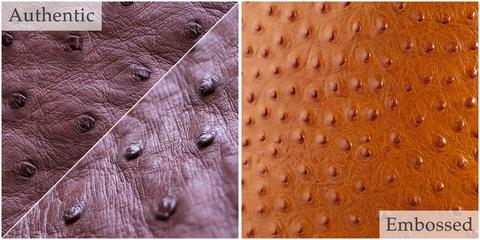 Conclusion: If the texture of the ostrich does not appear to have the same three-dimensional characteristics mentioned here, walk away. 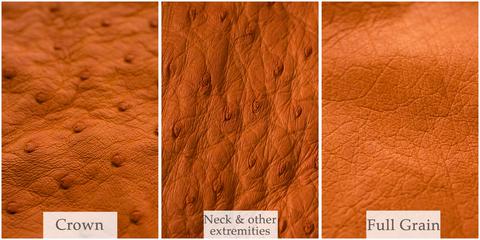 Once you know about the cuts of Ostrich Leather that can and can't be used in Genuine Ostrich Goods, you'll never be fooled again.